A Year in Review

A year ago, I was still wrestling with the notion that my daughter was pregnant. This normally joyous time in a woman’s life was marred by the timing of this blessed event. I had not told anyone, but I was going to run for office. This urging had been in the pit of my stomach for months. Having just completed a short sabbatical to write an academic memoir, Not So Cookie Cutter Kids, I witnessed the attacks against our President and recognized one painful truth: the socialist agenda would not stop willingly, it must be stopped by force. So the nesting and support I should have freely showered my daughter with as she prepared to have her first child were overshadowing by the looming knowledge that my armchair activism would need to increase, dramatically. Ultimately, I was on the secret lookout for a political race to run.

Months into the year, my daughter, this same one that was pregnant with who would become my first grandson, got an inkling to volunteer for our local party. One thing led to another. My broad political volunteerism notwithstanding, this was a new experience the two of us were diving headlong into together. Our President still under pressure from the constant media barrage. America under the squeamish un-comfortableness that seamlessly occurred after every tweet. The nation slowly pulling apart from itself. There was no time like the present to become politically active again.

First the mass meeting: a high school cafeteria filled with coffee, donuts, and patriots. Patriots that were eager to become party delegates. This was a process my mother frequently obliged herself to but one I was intimately unaware of. My litmus test of latent racism meant I would be on the look out for any potential offense that might occur when a person of color drifts into uncharted territory. It’s one thing to declare your conservatism when you have nothing to loose. But for my daughter’s sake, I prayed and hoped there would be no evidence of racism, imagined, perceived or authentic, at this event. In this two hour meeting, I was greeted by many familiar faces, some relatively new, others were old friends. Seated by our precinct (my daughter, the future First Vice Chair of the County Party, and myself were all who showed up to represent our precinct) we completed the required formalities and speculated about 2020.

At the annual County Convention, we arrived literally minutes before the ten a.m. cut off, before the doors were locked and the chairman of the meeting pulled back the curtain to reveal all things Republican to this slowly waking crowd. My daughter and I were ushered to the registration table where, because of the differences in our last names, we were separated for the purposes of registration. She, a fair skinned pregnant girl, was immediately handed a lanyard and directed where she should sit.

This in and of itself means nothing. But what is interesting is how certain people reassured me that I was welcome and would sort this whole business out. Others, not quite as friendly. But isn’t this the kind of odds we experience whenever we interact with other humans. Some have customer service skills and others don’t.

What these greeters and volunteers did not know, however, was my long and lengthy association with the Republican Party. There was no amount of back and forth to credentialing, no amount of slight conversation and side eye that would make me change my voting preference. But for a newbie, a recent convert or #WalkAway soldier would have been offended by the delay I was met with before the convention began. The three trips down a long hall to a back room would have been tiresome for some. Someone unsure about their welcome in the Republican Party might have turned away and walked out. The politically vulnerable would have been turned off by the way I was treated, especially in light of the way my daughter was welcomed.

These things I took into account mentally for the suggestion box. Here our President, the man who many conservatives chastised and disavowed, was being challenged in the media in a way few, if any, Presidents before him had endured. The attacks on traditions, traditional marriage, sexuality, even gender was under the gun. Speaking of guns, every ‘mass’ killing brought the Second Amendment back into the dinner table topics for discussion. America was in a state of unrest and here we were, Republicans, being less than welcoming to the black girl. It was slightly disheartening.

Yet what was worse, in my humble opinion, was the lack of willing volunteers to step up and fill Board positions. Here the party had been planning for this convention for months and yet we, as a collective, still had not vetted enough qualified applicants to fill Board positions. It seemed to be a case of everyone has an opinion but no one wants to do the work. As the Chairmen banged the gavel in between line items on the agenda, the call to fill open positions ensued. One by one candidates emerged but there were still obvious holes in the line up that put our county and our district at risk for political upheaval.

Midway through the morning, at the moment when the auditorium chairs have lost their cushioning, a friend and great patriot sat down next to me. We exchanged pleasantries but I immediately turned the hushed conversation toward the painful fact that we were still lacking a candidate for the Executive Board. Surely, there must be some qualified Joe or Jane present that could do the job. Why was no one raising their hand for the floor nominations that were, out of necessity, taking place. That was the moment when, as our eyes scanned the crowd, he asked, “Do you want to do it?“

The answer I gave was one I had uttered many times before: “No, but I will.”

‘No, but I will’ got me elected to the Executive Board of the Gwinnett County Party. ‘No, but I will,’ got me on the State Committee. Eventually that somewhat flippant response caused me to raise my hand for the 7th Congressional District. These unexpected turns of events, like the birth of my grandson, had been brewing for a while but ended up being none the less surprising in the end.

As I pondered the impact of my Congressmen’s retirement, I knew I had to say, “I will,” one more time. I will be the person who will show what it means to be a conservative. I will be the catalyst for ‘blacks and browns’ to look at a party, that was originally created for them, but has not be utilized by them in generations. I will be the one to volunteer to knock on doors, show up dressed in red, and deal with the somewhat frequent racist undertones a person who looks like me will hear. It was my pleasure to become a target for #MAGA aggression, lost friendships, time and money spent…. and memories made. I am happy to come out of the political closet, face the sneers and jeers as well as the snickers behind my back, and say that I am a proud Republican. And yes, I do stand with my President, even through this impeachment scandal.

Days before the decade changes, I look to 2020 with singular focus on what must be done- the part I play. I recognize, and constantly remind myself of the “why” I do what I do. I see my grandson and know that it is for him - and others like him who deserve an America to grow up in. These slight challenges I face mean nothing in comparison to what it means to live in a free society, where we can worship as we please and make other aims at happiness. This is the stuff of dreams and worth every single minute I spend on the phone or computer working when I could be watching Netflix.

As patriots, it is our duty to voluntarily say, I will.

Lisa Noel Babbage will release her latest book, The Black History Bible: How the Democratic Party Deceived a People in 2020. 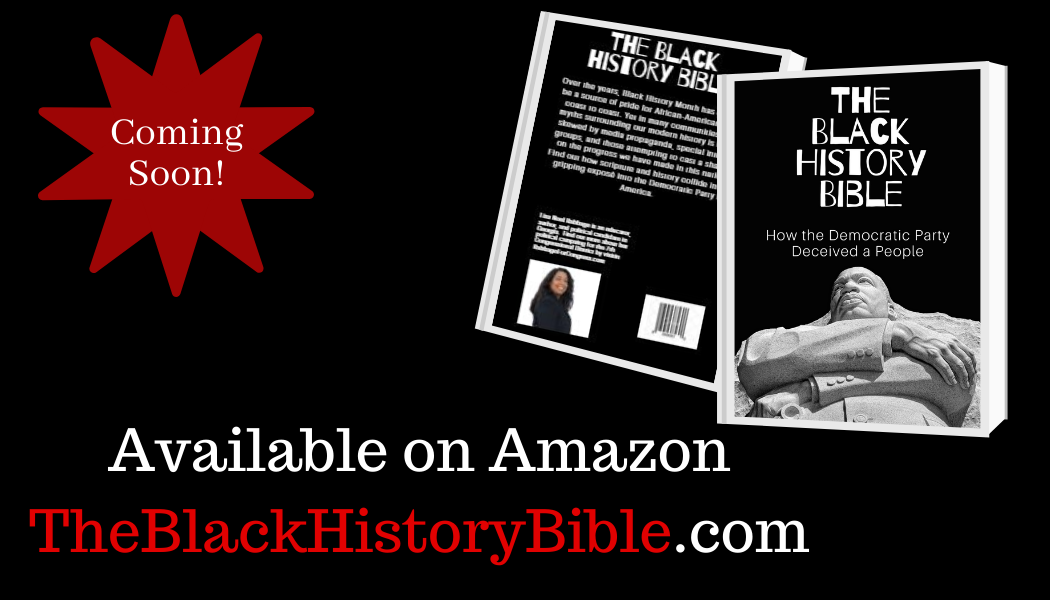 Lisa Noel Babbage is a author, teacher, and patriot who is dedicated to rebuilding communities through philanthropy and activism.